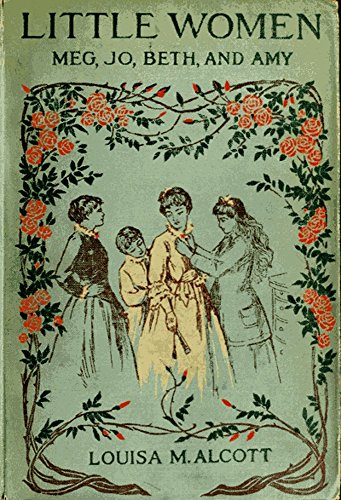 I wasn’t alive in 1868, so I can’t be certain, but I have a theory. Before we sorted ourselves into Hogwarts houses, becoming reluctant Hufflepuffs or defiant Slytherins, or used the characters of  Friends to describe our twenties, there were four women who defined us: Meg, Jo, Beth and Amy.

I don’t know if women ever said, “I’m such an Amy,” like we once said, “I want to be a Miranda, but I’m afraid I’m a Carrie.” I do know that Little Women was wildly popular from its very beginning, that it was Gossip Girls before TV, Beyonce before the radio, Twilight before—well, before vampire fiction happened to the world. It was a big deal. Such a big deal, in fact, that Louisa May Alcott immediately wrote a sequel, at the insistence of her publisher and a veritable legion of mostly teenaged girls. The following year, in 1869, Alcott published Good Wives, what most of us know as the second half of Little Women.

The March sisters at the center of Little Women have been with me for almost as long as I can remember. The novel was one of the first that my mother read to me, before I could read myself, so I must have met these girls when I was six or so. There was the eldest, Meg, poised and domestic; then Josephine, or Jo, creative and eccentric; then Beth, kind and timid; and finally Amy, an artist with expensive tastes and an erratic vocabulary. Loosely based on Alcott and her own three sisters, throughout my childhood these girls were as vivid to me as any actual friends.

I’m willing to accept that not everyone has fictional heroes, but I certainly do. Since I was home schooled until seventh grade, it was literary teachers who inspired my career. Anne Shirley, Laura Ingalls Wilder (more fictionalized than I knew at the time), and Jo March were the trio of fates that drew me into the classroom. And of these three, it was always Jo I liked best. I admired her forthrightness, her wit, her refusal to be satisfied with the usual paths available to a young woman in the nineteenth century. I shared (and still share) her yearning for recognition as a writer, the untold stories lingering in the drafty attic of an active imagination. If the four sisters of Little Women often reflected at least a bit of each reader’s character back to her, I felt Jo was the best mirror for me.

I suspect that I’m not alone in this. Jo is, after all, the character that most closely resembles the author herself in this semi-autobiographical work, and her defiance of social norms has been especially attractive in the last few decades. But the beauty of Little Women lies in the fact that there isn’t just one protagonist or heroic journey to complete, but four. When I returned to Little Women this summer, I was surprised to find that though Jo was still at the center, it was far less a one-woman show than I’d remembered.

Most chapters lend their focus to only one of the sisters at a time, and though Jo has a few more and Beth a few less, otherwise the spotlight shines almost equally on the four sisters, who are each dynamic and fairly nuanced in their own right. Amy is beautiful and talented, if a little vain and silly at times. Beth is hospitality personified, a woman transformed by suffering. And there’s also Meg. 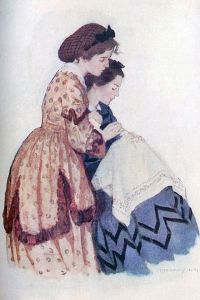 I confess that I never thought terribly highly of Meg. While Jo dreams of writing and Amy dreams of art and Beth inspires everyone with her goodness, Meg’s desires seem a bit tame by comparison:

I should like a lovely house, full of all sorts of luxurious things, —nice food, pleasant people, and heaps of money. I am to be mistress of it, and manage it as I like, with plenty of servants, so I never need to work. How I should enjoy it! for I wouldn’t be idle, but do good, and make everyone love me dearly (146).

Meg’s first episode in Little Women involves her attending the debut of a much richer friend, dipping her toes in the waters of materialism and objectification, an episode that concludes with their mother’s advice that she would “rather see you poor men’s wives, if you were happy, beloved, contented, than queens on thrones, without self-respect and peace” (101). The first half of the novel ends when Meg does just that, accepting the proposal of John Brooke, their neighbor’s kind and reserved tutor, whom Jo describes more for what he isn’t—romantic, interesting or rich—than any other qualities.

As a teenager, I was inclined to agree with my hero, Jo. I shrugged off Meg’s story, uninterested by her domestic desires. I wanted all that, too, but I wanted more than that. The fact that I didn’t read the book again for about twenty years didn’t help. If I remembered being a little put off by Meg in the book, I downright disliked her in the 1994 film version that I watched a dozen times in the interim.

Movie Meg is a chiding eldest sister, prone to doling out platitudes at opportune moments, existing as a dull foil to Jo’s liveliness, which she tries to tamp down at every opportunity. In the second half of the film, after her marriage, Meg appears only once, to show off her newborn twins, and then she’s gone, raising babies invisibly, as is the case in most movies. Movie Meg was more than just boring to me; hers was a fate to be avoided. I never wanted to be the dull older sister, confined to the margins of my own story.

This summer, in anticipation of the newest Little Women film adaptation, I reread the book for the first time since I was was thirteen, and found a different book than I remembered. First, on the reread I found was far less “a Jo” than I once was. Though I still relate to her literary pursuits, I also find Amy’s self-discovery through travel familiar, and of course, despite my movie-created fears, Meg’s story has become very much my own. What’s more, I didn’t even mind it, because Meg in the book is a person, not a vow-reciting, baby-creating robot. Though pragmatic and compliant, Meg is far from static, and her journey takes her not just to domestic bliss, where many stories end, but well into the thick of it.

With her marriage and family, Meg was most likely the most relatable character in Little Women when it was written, but her responses to the various challenges that arise in her by-the-book life are far from typical. While a poor but educated young woman at the time would be encouraged to improve her family’s fortunes through marriage, Meg does the opposite, and her early dreams of luxury and ease go mostly unrealized. Her appearances in the second half of the book develop the consequences of that choice, unfolding marital conflict related to income, parenting and gender roles, and not shying away from the uncomfortable conversations that ensue. We see Meg and John working on their marriage, which is generally a happy one despite financial hardship.

We also hear from Marmee as she warns Meg not to disappear into motherhood, reminding her that her husband has a coequal part in raising their children. “We each do our part alone in many things,” Marmee says of her own marriage, “but at home we work together, always” (401). While this is still critical advice, in the late nineteenth century, with motherhood idolized and gender roles set in stone, especially in the middle and upper classes, it was downright revolutionary.

In the upcoming adaptation, Meg is played by outspoken feminist Emma Watson, so I can only hope for the best as far as her portrayal goes. I hope that her story doesn’t trail off after her wedding, while the camera follows the less conventional sisters. Meg is perhaps not the exotic curiosity that Jo can be, but her story is both accessible and valuable, one that deserves to be known. The beauty of Little Women, as I discovered this summer, is the honor it conveys to many kinds of women.

As for me, in this season I’ve come to a reconciliation with Meg. Though I haven’t let go of Jo, and even find some kinship with Amy, it’s Meg that best represents who I am at the moment. If I learned anything from revisiting Little Women, it’s that Meg has a story, too. Meg, the oldest sister, the peacemaker. Meg, with her family and her jelly, her children and her little house. Meg, thankful and hopeful and, yes, responsible. This is the season of Meg, and—thanks to the character on the page, drawn in detail that a movie script has never captured—I’m happy to be in it.