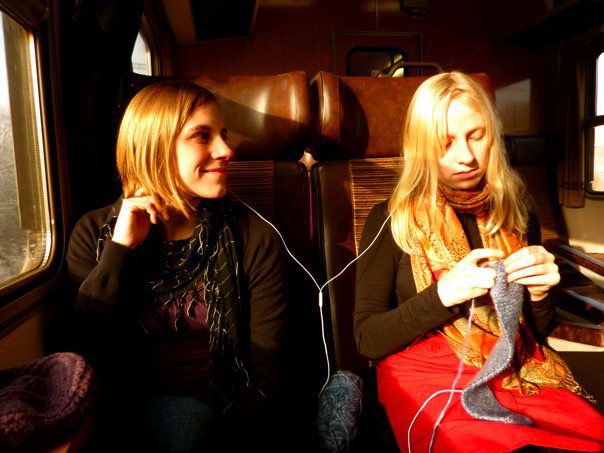 Let him who cannot be alone beware of community… Let him who is not in community beware of being alone… Each by itself has profound perils and pitfalls. One who wants fellowship without solitude plunges into the void of words and feelings, and the one who seeks solitude without fellowship perishes in the abyss of vanity, self-infatuation and despair.

Through a series of circumstances outside my control or any hint of my own merit, I am now in possession of the Dahlstrom family table. A few years before we moved back from Germany for good, my parents sold their house in the city, and moved to a chalet in the mountains, which apparently came with a table. The family table, being too large for my brother’s house, lived for a while with my sister in her house full of women, where it stayed after she got married, a marriage which came with a table of its own.

The house of women knew that they enjoyed the table on borrowed time, that someday a Dahlstrom might come and ask for it back. One day in 2018, that Dahlstrom was me. Our furniture consisted of an antique trunk and a wooden high chair, so I politely requested that the table and five associated chairs move in with us at the ladies’ earliest convenience.

A golden oval of maple, the table now sits in our dining room. The Dahlstrom family table was once the Michaelsen family table, entering my mother’s life when she was just a little girl. I can no longer see my uncles’ algebra homework, which legend has it is etched into one end by a series of three frustrated young mathematicians, or my mother’s errant tracing wheel, escaping her cutting board during early sewing projects. I can still see my own sewing errors, and also the places where my daughters’ potato stamps dripped paint through the wrapping paper they were decorating, and the abrasions from the Magic Eraser I used to remove the paint. Like any good dining table, it’s more than a place to eat. It has been desk and work table, hosted long after-dinner conversations and collected the wax from hundreds of dripping candles. It’s an artifact, a many-layered record of three generations of family history.

When we first moved into our current home, we had people over for dinner and put a few leaves in the table. This table has three or four leaves, with the potential to expand from a modest oval to a truly massive, round-ended rectangle. It works really well, but the process is far from smooth, involving lugging heavy leaves of a difficult-to-open closet, prying the table apart with the horrible screeching of metal on metal, and then putting it all together again. It requires at least two people to do it, so really with the table it’s come down to this: we either have it small most of the time, or large most of the time. There shouldn’t be a lot of back-and-forth about the matter.

A few days ago, I participated in an Instagram “challenge” that involved digging up a ten-year-old photo to compare with a current one. Proper practice also seemed to include a reflection on aging or the past decade, how different I look (not much) or feel (almost completely) from my ten years younger self.

I posted a 2009 photo of myself on a train with my sister. She’s knitting, and we’re sharing a set of headphones as we slide past the ever greyer landscape, traveling from Austria to the Czech Republic a few days before New Years.

We live an age of pictures, so much more so than which a photograph required stillness and silver plates, or even a limited number of frames on a roll of film that took time to develop. Photographs don’t always take me right back to when and where they were taken. Sometimes it takes a while to remember why I found scene significant, or what exactly I was trying to capture. Memory is tricky.

But this one I remember. I remember the way the landscape changed from green to grey as we crossed into Eastern Europe, how there were more chickens in the yard and it was the first time I didn’t know how to even attempt pronunciation of words on signs. I remember that we were listening to the Lion King (Original Broadway Cast, not Elton John soundtrack), but switched to The Fiddler on the Roof because it felt more appropriate to the surroundings. I remember that the train was both grander (leather seats!) and shabbier (cracked, dusty leather seats!) than the Austrian one we’d left behind in Linz.

I remember that I had questions. I was a teacher, and proud of it, but after a close call with teacher layoffs six months earlier I was restless. A friend had just begun teaching in Europe, and I was in the process of dusting off long-dormant dreams to do the same. Had I done enough, I wondered, contributed to the bottomless well of need that I saw each day in my school to spend a few years exploring other needs, elsewhere, and satisfying a few curiosities of my own? If I left, would I ever come back again? Could I really leave Seattle, this home I’d been building for as long as I could remember, to start over again somewhere else?

I also remember feeling alone. Not lonely, at least not all the time, but profoundly individual. I knew that the questions—the staying or going, the how long and where of it all—were mine to answer. Though it hasn’t always been this way at critical life crossroads, I felt confident then that staying and leaving were both right, that God wouldn’t be mad either way. I had a supportive family, was unencumbered, for better and worse, by romance of any kind. I was rich in love, as the photograph of my sister and me reminds me, but the decision to go was mine alone.

I’ve always thought I’d make a good hermit, but I’m more than grateful that life hasn’t gone that way. Half a year after the train ride in the picture, I moved twice in one summer, meeting completely new communities each time, an overwhelming feat for an introvert like me. Though I’d flirted briefly with living alone for the first time in my life, in Germany I was assigned roommates, and as we lived in the center of the village, our home became a gathering place for friends, students and colleagues. Those years in Germany, especially the first few, were marked by endless invitations to community, moments when I let more and more people in, my life and heart becoming intertwined with theirs. It was there that I started dating the man I’d marry, there that we learned what it meant to operate as one, to make our home a place of warmth and welcome to those around us.

If you’d asked me in 2009 if I’d someday be the keeper of the family table, I probably would have said no, restless and uncertain as I was. I thought my life was trending toward solitude, not hospitality. I’ve never been happier that God’s imagination is bigger than mine, and that I went with the unexpected circumstances instead of fighting them.

Yet even if I could have foreseen the table’s new place of prominence in my home, I would never have imagined that it would keep most of its leaves in, most of the time. Every once in a while, I think about putting the leaves away, but there’s always a family meal, a party, a gathering of some kind on the horizon. Those leaves are heavy, so they stay, making our table expansive, reminding me that it’s ours to fill. Reminding me that it’s 2019, and that in this decade of moving and adventure, I’ve learned more than anything the complex beauty and critical importance of community. It’s been a busy ten years, and I’m praying in the next I will develop eyes to see who needs the welcome of a fully-leafed table, as I learn to practice the hospitality that never ceases to surprise me.