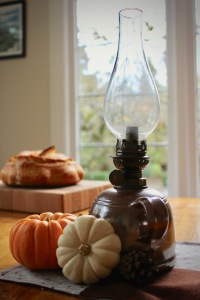 It was a great day when I discovered that Trader Joe’s sells small pumpkins for 69 cents. America and Germany are tied in their veneration of pumpkins. In Germany, I could go to the market and find five kinds of pumpkins suitable for making various types of soup. That’s pretty much what you do with pumpkins in Germany: make soup. But the soup. There are endless varieties, for endless types of pumpkin, and they’re all delicious. Here, the Season of Pumpkin arrives (in August!) in a series of orange, leaf-adorned packages—breads, muffins, I don’t know… bacon?—spiced with nutmeg and cinnamon, and somewhat less consistently with actual pumpkin. Which brings me to the mini-pumpkins. Though there aren’t many edible pumpkins in an average American supermarket, decorative gourds abound, including the adorable varieties sold for super-cheap by Trader Joes. I bought… a few. But the season is far from over. The little pumpkins will be lovely for a few weeks or months and then, like a Christmas tree or a vase of flowers, it will be gone. Next year, maybe I’ll get more, but they promise not to last forever. And it’s the concept of “forever” that I’ve been thinking about lately. The term “forever home” still mostly applies to rescued puppies, but like a canning jar or a wooden pallet, it’s found a second life in the colorful world of Pinterest and Instagram. Usually accompanied by a photo of a grinning couple with a SOLD sign, or a particularly well-decorated room is the caption, our forever home, a triumphant declaration of permanence that feels revolutionary to my transient peers. Statistically less likely to buy a home or have a long-term job than any other generation, millennials celebrate when we find something that we intend to keep for a while.  Several months ago, mired deep in the dark conclusions of The Great Gatsby and Of Mice and Men, my students and I discussed the American Dream, which those novels were already questioning nearly a century ago. It’s not for everyone, it may be impossible, and even if it’s possible, it won’t satisfy the way we think it will. It is the “future that year by year recedes before us,” wrote Fitzgerald in his novel’s conclusion, eluding us even as we keep trying our hardest. Still, we agreed then, the dream of hard-earned material success—so often symbolized by the purchase of house—hasn’t gone anywhere. If we’re honest, my students and I admitted, we mostly still want that, too. We’d laughed then,  a bunch of missionaries and their children living temporarily in Germany, a little bewildered with wondering where we’d all “end up.” And I while I celebrate with my friends who’ve permanently disembarked the long parade of packing and moving, leases and apartment-hunting, it’s not where I am right now. The realities of the Seattle housing market didn’t surprise me, and the lovely place we’re living in now won’t be forever. Nor, perhaps, will the next one. Or maybe the one after that. Quite literally only God knows when we’ll find our forever home. Except maybe we already have. Because apart from committing to a building, one I’ll keep repainting and redecorating and remodeling my whole life, I’ve made other permanent decisions. I’m married to a man I’ve vowed to stick with for life. My daughter will always be my daughter, and the next one will, too. And these two, soon three, people—they’re really home, aren’t they? Together we’ve shared three homes now, lovely places all temporary, but without the people, the grandest mansion I could buy wouldn’t be home. With them, it almost doesn’t matter where we live, as long as we’re together. 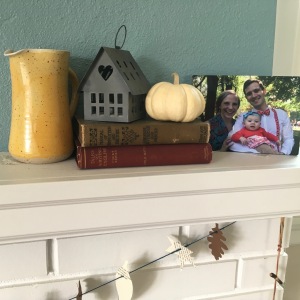 I hold loosely (but still hold, if I’m honest) the hope that someday I, too, will live somewhere that I’m not thinking of leaving any time soon. But in the meantime, I’m incredibly thankful for the Not Forever Houses. Like the little pumpkins on my table, they’re gifts that are sweet for a time, a season, to be shared with people I love, people who make every place home.