It was my brother’s fault.

How many times have I invoked this big-sister refrain in the slightly-more-than-thirty years we’ve shared together? Plenty. But this time it’s actually true: Without my brother, we would never have gone camping this summer.

We loved camping as kids; Dahlstroms went camping more often than any other kind of vacation. Sometimes we went just for the camping; popping up a tent or two near a river, or a beach, or a waterslide park. Other times the tent was an accessory for a cross-country road trip, usually to California or Montana, our portable and affordable lodging for the journey. Either way, the memory of falling asleep in a nylon tent, with the sound of water or a highway mingling with the breathing of two to four other family members, that’s summer. It was grand.

Camping followed me into adulthood. I backpacked a lot in my twenties, and took a few car camping road trips like those I remembered from childhood. Eventually I owned a tent of my own, which I carted over to Germany and used mostly to shelter from the rain while camping in one particular castle ruin, about an hour’s walk from our village. It was a two-person Kelty, sturdy and simple, and the last time I used it was the best time, when I camped with a dear friend on the shore of Lake Geneva in early summer, just before she moved back to America. (That tent ended up staying in Germany, and it was hard to let it go. Read about it here.)

So it shouldn’t have been controversial when my brother suggested, early in the summer, that we have a Dahlstrom Sibling camping trip. After all, we’ve been camping together for as long as any of us can remember.

But with the idea came unfamiliar fears. In this two-child life that involves packing a mid-sized SUV to the ceiling for a mere overnight away, and camping seemed like an Ordeal. We’d need to get our daughters to sleep in said tent. We’d need a new tent. We’d need to cook outside for, like, a lot of people. And on top it all was the lingering pandemic, the masked phantom that looms over gathering everywhere. We could be careful, we could plan well, but camping would still be, well, hard.

My general go-with-the-flow attitude pulled me in, anyway, along with a few compromises to insure a back-up bed for the kids within easy proximity, along with as many virus precautions as we could fit into the already low-risk camping venture. We made reservations, planned meals, and procured mansion-like tents large enough to house the all-important Pack-n-Plays to keep our toddlers in bed and—we hoped—asleep. A few weeks later, we find ourselves in a shady campground, claiming spots and firing up the massive stove that my brother brought along with a kitchen’s worth of cast iron. We are camping.

For the first 24 hours or so, Camping With Children is a feat, a trick to be mastered for amorphous potential rewards, an adventure to be had in a time when adventures are scarce.

It’s not until the second evening, when we’re sitting at the table after dinner, when it all mellows into something I recognize. My brother and his wife have made delicious risotto for the grown-ups and hot dogs for the kids, and we’re lingering at the long picnic table. Just next to the campsite is a small, open hollow in which a dozen or so trees were felled and then abandoned, so that the logs crisscross themselves into brown geometry, begging children to balance on them precariously, begging a hand of whatever grown-up will accompany them.

Across from me sit my parents, married nearly 41 years, with my youngest daughter, Eleanor, beside them. As we talk, Ellie keeps pulling on my mom’s sleeve, saying what sounds to us like “Throw it!” Thinking Ellie means the ball on the top of her hat, my mom keeps saying, “No, I can’t throw it. It’s part of my hat.”

Finally, Eleanor grabs her hand, points to the woods, and says again, “Fow it! Come on!”

“Oh, she wants to go to the forest with you,” I explain.

My mom, volunteer forest ranger, lights up. “Who could resist that?” And they wander off to join the other two granddaughters in the wilderness. I watch them for a moment, thinking about how this is what camping used to be to me, too. We’d never bring any toys—toys would get lost or dirty in the woods—but we never really needed them. There was too much to do, too much to see.

I think about how much a part of my life this experience, and these people, have been, and how nearly I missed out on it, just because it seemed hard and overwhelming, different than it once was. Thank goodness my brother insisted, seeing that time together outside—for the most part the only time together we’re having these days—was worth a certain amount of trouble.

My peers and I are a generation of people raised to find out who we are, deriving our identity from our tastes and passions. This is fine for a season, but it’s not sustainable. Life circumstances make those passions seem inaccessible, and tastes change as we do. Some of those circumstances are out of our control, like a pandemic or a wildfire, while others just come with new stages of life, like parenting. 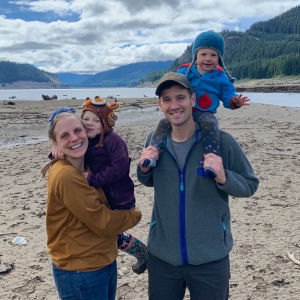 It’s taken me almost five years to figure out which aspects of myself are important for me to keep returning to as a mother, like writing and being outdoors, and which can lie dormant for a while without much damage, like music and travel. And even the ones I’ve held onto look different now than they used to.

Still, I’m thankful for the friend who coached me through planning a novel this spring and summer, a fellow mother who showed me that writing fiction isn’t incompatible with having young kids. And I’m thankful for my family, who helped me to see camping through this new lens, as an adventure both simple and complex, as a way to see each other and, for once, to let our kids get as dirty as they want in the wilderness of their dreams.