Christmas Eve morning, Timmy starts texting me as soon as he gets to the airport. With his customary picking-people-up-in-Zürich Starbucks drink in hand, he relates a new and strange Swiss tradition: dressing up in costumes to pick up relatives on Christmas Eve.

“Seriously,” he writes. “We’ve got about 20 Santa’s, a family of baristas… and someone hiding in a box…” I laugh and reply that he should have worn his lederhosen to collect our friends from Seattle, who will be visiting us here in Kandern for a week.

I look out of our window on the grey, sleepy village as I make cinnamon bread on this quiet Sunday morning. All of the shopping in preparation for three closed-store days is done, the house cleaned and the presents wrapped. We have just one door left to open in the Milka advent calendar, two more ornaments on the Jesse Tree devotional. Christmas is here.

In the windowsill, I notice tiny, light-pink flowers blooming on the slender twigs that have been sitting in a pitcher full of water for almost a month. The twigs were handed to me at the grocery store on December 6th, a gift from the cashier. (This is not an altogether uncommon experience; Luci has so far collected two stuffed animals and a felt bag from affectionate cashiers, just by looking cute.) “Danke!” I’d murmured, juggling the bouquet of twigs with the the stroller handle and my groceries as I left the store. One of the bakery assistants said something to me I didn’t understand, from which I caught only the name “Barbara,” and I’d left feeling foolish and laughing about the German respect for all seasons, both flowers and twigs getting their fair share of attention.

It was only on returning home that I learned the significance of the branches, meant to commemorate December 4th, Saint Barbara Day. According to legend, the medieval virgin, Barbara, having converted to Christianity against her father’s wishes, was imprisoned by him in a tower. On the way to her imprisonment, her robe got caught on a cherry branch, which she took with her, placed and placed in a jar, where it bloomed in her captivity. Though observed differently in different Catholic and Orthodox regions, here in Germany people keep the branches in water, anticipating good luck (or, in some versions, a marriage) in the coming year, should the branch bloom by Christmas Day.

At the time, the custom delighted me, both in its strangeness and in the simple fact that, eight years after moving here, I still learn so much. It’s how I feel when I find a new or particularly moving part of the Bible, or when a close friend or family member utterly surprises me. The joy of learning, discovery, never gets old to me, and I’m happy to keep finding it in a place that’s grown familiar, to know that even when I’m home, there’s always more to learn.

Today, Christmas Eve, the buds have begun to poke out into the grey day, and I think about the branches themselves. Taken from their tree, they bloom in a new place, in a strange season. What a beautiful sight for us here, as we celebrate Christ’s birth with friends, far from our places of origin. “Bloom where you’re planted” is cliche for a reason, I suppose, but these branches give it new significance for me today, in this community of expatriate students, teachers and missionaries, seeking to live and grow together, some of us far from home.

According to the flowers on the branches in my window, this will be a year of blessing, but I could have told you that without them. Because this year, like all of the others, is God’s, every day and moment. I look forward to the journey ahead, in its twists and turns, to learning and discovering with these two people I love. 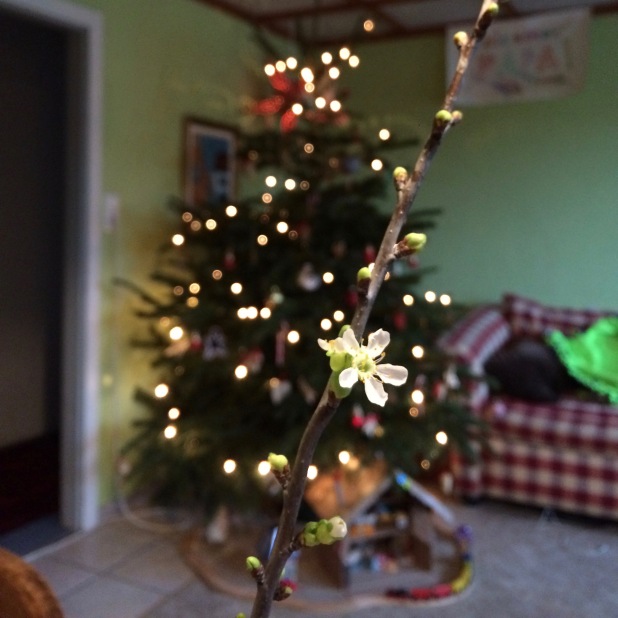