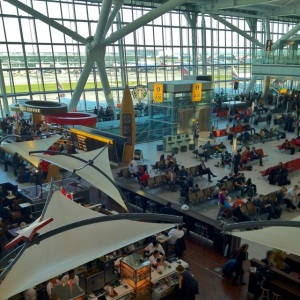 With one sip of sweet, hot, vaguely coffee-flavored milk, I could be fourteen and trying coffee for the first time, or twenty and drinking my first latte of my shift at 5:30 AM as the sun rises. It doesn’t matter that ten years have passed, or that I’m eight thousand miles away from the origin of Starbucks coffee. It’s all the same.

This whole experience, actually, smacks of déjà vu. But not the kind where I know that it’s my imagination, but the realization that I have actually sat in this airport and drunk this coffee, sitting by this window and looking out onto a similarly stormy English sky.

Heathrow Airport’s Terminal 5 is a strange place, a food court and shopping mall where gates are only revealed a precious 45 minutes before boarding, to the dismay of edgy sojourners eager to get as close as they can to planes that they can’t get on yet. And as I finish my sushi from Pret A Mange and my latte from Starbucks, I realize that three years of living in Germany has added one more thing to the list of  interests I share with Black Forest Academy students. I love airports.

Our students, whether of the missionary, military, diplomatic or other expatriate variety, love airports. Not traveling, always—traveling, for many of them, is a complex, multi-day affair, requiring far more adulthood from them than they actually possess—but airports. In an airport, most of our students feel experienced and comfortable, even experts compared to some traveling novices around them. Others simply enjoy the feeling of being just as out of place as everyone else, for once.

I suppose I share some of this, now. But for me, the real allure of this place lies elsewhere. In airports, I find an endless source of variety and challenge.

Even though air travel still seems like the marriage of magic and cheating, when I can fly from Germany to Seattle in a day I almost believe that the world is small and manageable. The more international terminal of one of the greatest air travel hubs in the world, it also features almost endless supplies of languages. Five continents are represented on the Departures board, which only covers the next few hours. The travelers in Terminal 5 gather only for a moment, to eat and await further direction, before scattering to corners of the world. The world is wide, and I’m humbled to realize that the international experience of which I can be so proud is just a tiny fragment of it. There’s so much more yet to see.

Apart from these endless variations on the human theme, each airport offers a new challenge, a game whose rules are always changing. I flew alone for the first time in February 2002, just a few months after a handful of madmen changed this mode of travel forever. Since then, each flight is different, a chance to look around, wide awake, and discover what’s happening here. This shuttle, I don’t remember it from last time, but it looks right. We’ll see. Is this a shoes on security, or a shoes off security? Why do they stamp my passport some places but not others, and demand to see a visa, in increasingly frustrated French, when neither my origin or destination are Germany?

More than anything, airports remind me that I don’t know it all. I keep making mistakes, keep getting delayed by storms or lost on one-way trains that leave me stranded in wrong terminals. These places are crazy, surreal versions of real life, where the consequence isn’t life-and-death, but another day delayed from going home feels almost as serious. I get the feeling I’ll never be quite comfortable here, but that here on the edge of comfort is where I learn the most. There will always be new twists to this travel business. And for me, that’s more a promise than a threat.